The Grieg Society of Great Britain was founded in October 1992 to promote British interest in Grieg and other Norwegian composers, and to pursue the cultural links between Britain and Norway. The Society is affiliated to Grieg Societies across Europe, in the United States and Japan, under the umbrella of the International Grieg Society based in Bergen.

The Society arranges talks and concerts, as well as informal social occasions, and a “Record of the Year” is awarded annually for a recording which has added significantly to the repertoire. The Newsletter is published two or three times a year, with news of the Society’s activities and other relevant information, while the annual Grieg Journal, containing more in-depth articles, is also sent free to members.

Plans for 2018 include a concert with the Vivaldi Concertante on April 21st and a “birthday” concert for Grieg, played by international pianist Motoki Hirai, on June 16th, both to be held at the Norwegian Church. 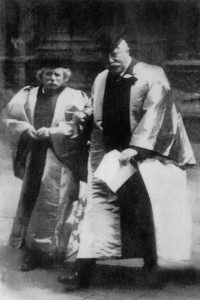 Edvard Grieg and Hubert Parry when Grieg was created as
Doctor of Honour at the University of Oxford 29 May 1906.